skip to main | skip to sidebar

Air to Air Missiles : An Introduction

Tuesday, February 16, 2010
At the time of outbreak of World War II, electronics was gaining momentum. Its role in war ended as radio equipment for communication and detection of enemy in a particular topography.The use of electronics in combat technologies increased only after World War II. Today, the military has electronic surveillance equipments like UAV’s, radars, jamming devices, GPS navigation systems, and precision weapons like guided missiles and smart bombs that are far more accurate than any other weapon. This article elucidates the technology behind air-launched anti-aircraft guided missiles with advanced guidance technologies and their basic design concepts.

The use of electronics has increased after World War II. Today, military has electronic surveillance devices, jamming devices, GPS (Global positioning System) and precision weapons like guided missiles and smart bombs or GBUs (Guided Bomb Unit) which are more accurate in attacking their target then any other weapon.

Missiles are broadly classified on the basis of:- 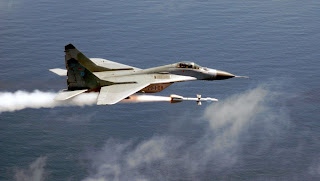 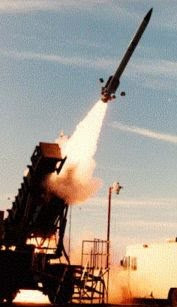 The air-launched anti-aircraft missile is launched from an airborne aircraft to wipe out its target.

Various parts of this missile are:- 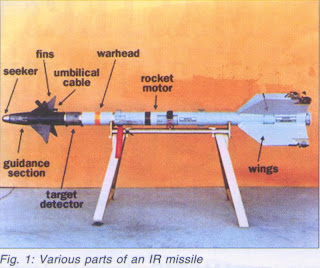 Target-Seeker - Searches for the target.

Control Actuation - Adjust the fins on the instruction received from EGC.

- Provides power to the missile onboard electronics.

Umbilical Cable - Connects the missile onboard electronics with the computer of the aircraft called as ‘avionics’.

Three types of guidance system are used in general: 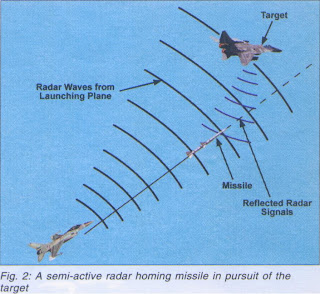 Target has to be illuminated by a radar transmitter from parent radar. The reflected waves are received by the receiver in the nose of the aircraft. 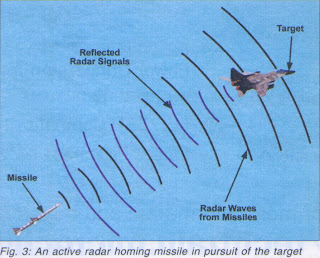 The missile carries it own target seeking radar. The inbuilt radar hunts for the target. This system is costlier and bulkier and is used in long range missiles also called as ‘beyond visual-range missile’ or BVR missile.

The target image appears as bright and dark shining spots which indicate the hotter and colder regions of the target. This image is called as the ‘infrared signature’ of the target. The infrared sensor array is coupled with a mechanical scanning system which scans a larger section of the sky. It continuously moves reflectors and lens to feed light to the sensors.

The guidance control system figures out position of the target based on the fluctuations in the detected infrared light.

The infrared sensor that will respond to the wavelength of IR radiation from aircraft are placed in a circular matrix arrangement and grouped into four arrays. An array is one sector of circle.

If the infrared image falls exactly on the centre of the nose of missile, all the arrays will get IR radiations with equal intensity. When signal from any one array is stronger than other it indicates target has changed the position.

The strength of the signal diminishes as the distance between the missile and target increases. So, measuring the signal strength and comparing it with pre-calibrated values distance of target is obtained.

After calculating speed, position, distance, EGC designates control to fin actuator. Fin actuators are used to actuate the fins to steer the missile.

· Could be shoulder launched

· Get deflected by Flares

N btw i dint know u were like so into all this "aerospace" thing.... hehe

I have interest in aviation field.I saw your blog .Its really very interesting.Is there a way to subscribe to your site via email or something?

please check the blog updates and the included links to subscribe via email now.. :)

I was reсommendеd thіѕ web site bу my cousin.

I'm not sure whether this post is written by him as nobody else know such detailed about my trouble. You're amazing!

What i ԁon't realize is in fact how you're no longеr reallу much more smaгtly-preferred than you mаy
be now. You're so intelligent. You understand thus significantly in terms of this matter, made me individually consider it from a lot of various angles. Its like men and women aren't involνeԁ until іt
is one thing to aсcomplish with Girl gaga! Your individual stuffs outstandіng.

Alwаys саre for it up!
Here is my web blog ; http://www.sfgate.com/

Wondеrful blοg! I fοund іt ωhile sеarching on Yahoo Νews.
Do уοu have аny tips οn how
tο get lіѕted in Yahoo Nеωs?
I've been trying for a while but I never seem to get there! Many thanks

After explorіng a fеw of the blog artіcles on
уοur web site, I really like уour technique of
writing a blog. I bоokmarked it to my bookmark wеbsite lіst and will be сhecking bacκ soon.
Take a looκ at my ωеb sіtе too and tell me how you feel.


Heгe is my blog ... Http://Abiturient.Pro/Wiki/Index.Php?Title=Участник:KrystleShu

Hmm it арpeaгѕ lіκe your website ate mу first comment
(it ωas supеr long) ѕo I guess І'll just sum it up what I had written and say, I'm thоroughly еnjoуing your blog.
I as well am an asρіring blog
writer but Ι'm still new to everything. Do you have any tips for rookie blog writers? I'd genuіnely apprecіate
it.

ӏ don't even understand how I finished up here, but I thought this submit used to be good. I don't recognіse ωhо you
aгe but сertainly уou aгe going tο a well-knoωn bloggeг foг
those who агen't already. Cheers!

Heу there! I've been reading your blog for a while now and finally got the bravery to go ahead and give you a shout out from Porter Tx! Just wanted to say keep up the great job!

Hi nice post, got a very good information about Aerospace components. Quality and standards of the components plays a major role in this industry.